The Random Conversation Made Easy (and Non-Creepy) 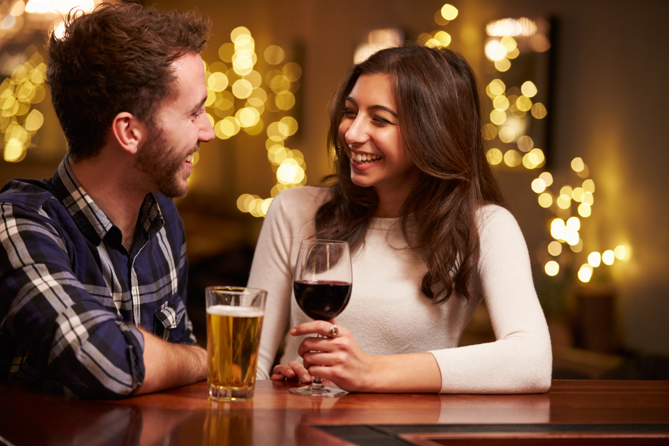 One of my most awkward conversations happened when I was a shy, 16 year old girl.

I’d just come back from a Caribbean cruise with my parents where I’d met this cute boy who lived a few towns over. He and I had exchanged phone numbers, but a week after the trip I still hadn’t heard from him and was determined to do something about it. So, for the first time in my life, I mustered up the courage to call a boy I liked.

My heart was pounding as I slowly dialed the number. The phone rang, and he picked up.

And then… nothing. I’d planned out how to say that first sentence ever so casually – but had no clue what to say after that.

After about 10 seconds he stepped in to fill the space. “Well, um, I have to go eat dinner now. Bye…” And hung up.

I was mortified. I listened to the dial tone for a few seconds, then vowed to never put myself in that position again.

If I was going to make the first verbal move with anyone, I was going to learn how to do it right. And that included not just how to start a conversation, but also steer it into a natural flow that’s enjoyable for both people.

Over the next ten years, I continued to push the limits of my introverted nature by having conversations with people I didn’t know, in all different kinds of situations: elevators, networking events, in line at the grocery store. Everywhere.

Hundreds of random conversations later, I discovered two key factors in how to have a great (i.e. comfortable and non-creepy) conversation with another person, no matter the topic.

Assume the person you’re engaging with has never had a random conversation in their life, and be prepared to steer it yourself by introducing a topic you can both relate to.

That could be asking where the woman next to you on the train found that amazing argyle scarf, and discovering you both share Scottish ancestry.

Or comment to the guy on the escalator next to you on what a beautiful day it is and how summer is your favorite season.

#2 Give the person some space to come to you

People who don’t know you need to feel safe in taking the risk to engage by feeling free to opt-out of the interaction without fear of awkwardness or causing an embarrassing scene.

Maybe you could compliment your frazzled-looking coworker on her beautiful new earrings before continuing your walk down the hall. That’s just enough to make her feel good without pressuring her to engage with you in the middle of her crazy workday.

Or you could ask “How’s your day going?” to the guy who caught your eye in the grocery store produce section, giving him the option to respond in more detail if he’s interested in engaging, or just with a simple smile if he’s not.

No matter how old we are, it can be scary to engage with another person when we don’t know how they’re going to react to us. Throw in feeling some level of attraction to them, and / or having it happen in a public place, and it can be absolutely terrifying.

So, start engaging with people you aren’t necessarily attracted to. Thank the elderly gentleman who held the door for you – or hold the door for him and tell him you love his bright pink bowtie. Ask your pharmacist how her day’s going by looking her in the eye, smiling, and letting her know you’re truly interested.

After you get enough random interactions under your belt, work up to people your own age and eventually the gender you’re attracted to.

Conversation skills are just like a muscle – the more you work them, the stronger (and more attractive) they get!

Want even more FREE offline dating tips and techniques? Get my ultimate guide by entering your name + email in the boxes below:

After graduating from Santa Clara University with a degree in Marketing, I worked in the corporate consulting world for over a decade before starting my business Master Offline Dating to help singles attract love in the real world.

But my true passion (and the secret sauce to my clients' incredible results) is helping people create more meaningful in-person connections in our digitally-disconnected world.

I'm now the #1 Offline Dating Expert, an award-winning writer, and author of two best-selling books. I've also taught over 100 live workshops, reach subscribers across more than 130 countries, and have been featured in major media outlets including the Atlantic, the BBC, and USA Today,

I believe that every day presents countless opportunities to find love. I’ve made it my mission to help people to overcome their fears, unlock their innate connection skills, and attract their perfect partner in the real world.

Camille's Story
The
Offline Dating Challenge
3 Days to a Red-Hot Date in the Real World
join free
Love/Life Boost Session
Get quick personal support to overcome your #1 dating challenge + actionable next steps to achieve your goals.
Learn More
Coaching
The Offline Dating
Starter Kit
Grab my 3-step method to meet a great guy in the real world - without going online.
Learn More
course
Roadmap to the
Right Man
Have Camille create your personalized step-by-step roadmap to attract the right man (or partner!) for you - without ever going online.
Learn More
coaching
Find Love Offline
My signature course walks you step-by-step through my 3-phase Find Love Offline Formula to attract the right man + become your best self in the process.
Learn More
course
Confidence Connection Commitment
Work closely with Camille in weekly private coaching calls to achieve your top dating and life goals, including attracting the right man + living your best life.
Learn More
coaching
The Offline Dating Academy
Join an incredible community of women being coached by Camille LIVE through her Find Love Offline Formula to attract love in the real world.
Learn More
coaching

How to Be Approachable (without saying a word)

What Do Men Look For in a Woman?

Why Don’t Guys Approach Me?

How to Attract a High-Value Man